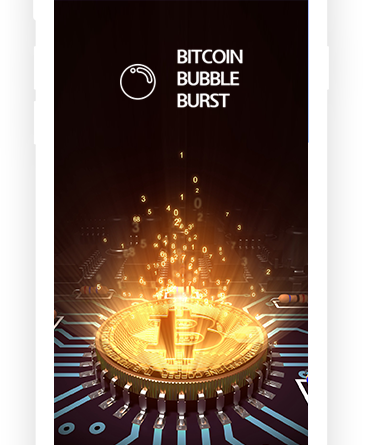 Whether you are a new investor in cryptocurrency or you are an aged bitcoin HODLER , you might be aware of the speculations raised around the future of Bitcoin and its over-hyped crashes which have scared many people from investing in this magical side of the world. It is said that Bitcoin is a bubble and it will burst soon along with all other crypto coins, but every prediction was proved false by Bitcoin itself when it touched the legendary mark of $10,000 recently.

With Bitcoin becoming so expensive it has also attracted the attention of governments, big organizations and even centralized banks, who somehow want to cash on this opportunity.  With the big fish entering the market they will certainly grab a large slice of the pie. With that much money and Bitcoin in the hands of those who might change the market with one trade, it becomes difficult to predict whether Bitcoin will go up or crash while you are sleeping.

To debunk the myths created around this bubble-burst, four crypto-enthusiasts from Berlin, Germany have created an app called ‘Bitcoin Bubble Burst’ which is based on smart technology. Using the basics of Artificial Intelligence and incorporating elements of machine learning into it, Bitcoin Bubble Burst, will alert the users about an upcoming change in price, whether it will go up or down. Users can also customize their applications by setting a limit on the price of Bitcoin that they want to be forewarned about, and once the price touches that limit the users will immediately be notified so that they can take an appropriate action if required.

This app also works on offline mode and can send an SMS to users who might not be connected to the internet at that point of time when Bitcoin crashes. However, there are also short-comings of the usage of such an app, because if people get to know about a looming crash they will immediately start pulling out their dollars and the crash will eventually happen even earlier than predicted.

This application has also been tested in rigorous environments and even with a very limited data fed to it, compared to what it is going to rely upon when it will go live – it still gave accurate results. Once it is live it utilize all price date from the past to analyse the pattern and to predict the growth or the fall, combined with users’ interpretations and behavior, some breaking news circulating in the market (like if some country announces ban on cryptocurrency or taxes on the income from it), and a lot more factors that can eventually affect the price of Bitcoin in the long term. With such advanced tech at our disposal and the market for such applications, it seems that in the future humans will lose control and it will be the machines that run the world.

Bitcoin Bubble Burst, for now, is one of the most innovatory and interesting things to happen in the cryptocurrency world.

For more information or to sign up for Bitcoin Bubble Burst, visit their Github