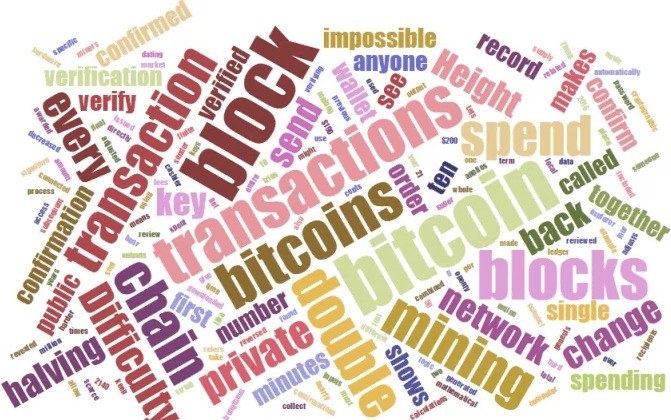 BTC:  A common unit to describe one bitcoin, as USD represents one United States Dollar.

Bitcoin:  Bitcoin with a capital ‘B’ is used to describe the the network or protocol that bitcoin runs on, bitcoin with a lowercase ‘b’ represent the digital token or money that that is used on the Bitcoin network.

Bitcoin Address:  Also known as a public key, is like an email address.  Give your bitcoin address to anyone who you want to receive a payment from.  It is best practice to use a new bitcoin address for each of your transactions.

Wallet:  Where you store your bitcoins. A bitcoin wallet is a program that manages all of your bitcoin addresses and allows you to save or spend your bitcoin.

Blockchain:  A publicly shared record of every bitcoin transaction that has ever been processed.  The blockchain is in chronological order to easily navigate where your bitcoins came from and where they go after you send them to someone else.  Every ten minutes a new block is added to the blockchain through mining.

Double Spend:  When a malicious user tries to send their bitcoin to two different people at the same time to pay for several services with the same bitcoin.  It is up to miners to decide which of the transactions is accepted into the network.   One transaction will receive confirmations, the other will be rejected by the network.  Most users never have to worry about double spend attacks, they are rare and difficult to pull off.

Mining:  Bitcoin mining is making computers do complex mathematical calculations for the Bitcoin network to confirm users bitcoin transactions in a block.  Bitcoin miners greatly increase the security of the network and are rewarded with new bitcoins and transaction fees for their efforts.

Hash Rate: Is a measurement of computer processing power of bitcoin miners.  Miners earn bitcoin for their share of the network hash rate, so they are incentivized to have the highest hash rate possible.  This works out for everyone because the security of the Bitcoin network increases as the network hash rate grows.